A 2017 survey found that 60 percent of marijuana users smoke with their close friends.  As states slowly open up to the idea of marijuana legalization, we can only see this number getting higher. Unfortunately, many workplaces still maintain a zero tolerance policy on drugs – meaning that even if your state has legalized weed, you can still get fired from testing positive on a drug test.

You may have already considered duping a urine drug test by swapping out your urine sample with a friend’s. But if you’re also part of the 60 percent of weed users who smoke with their best buds, you might be hard pressed to find anyone who’s both willing to lend you their pee AND drug-free. And when it’s slim pickings out there, you might find yourself desperate enough to borrow just anyone’s pee!

But you might be wondering, is there a risk in using pee of the opposite sex? Is there a difference between male and female urine? And can a male use female urine for a drug test (and vice versa) and not get caught? Keep reading as we answer all your questions in this article. Here’s everything you need to know about drug tests and gender. 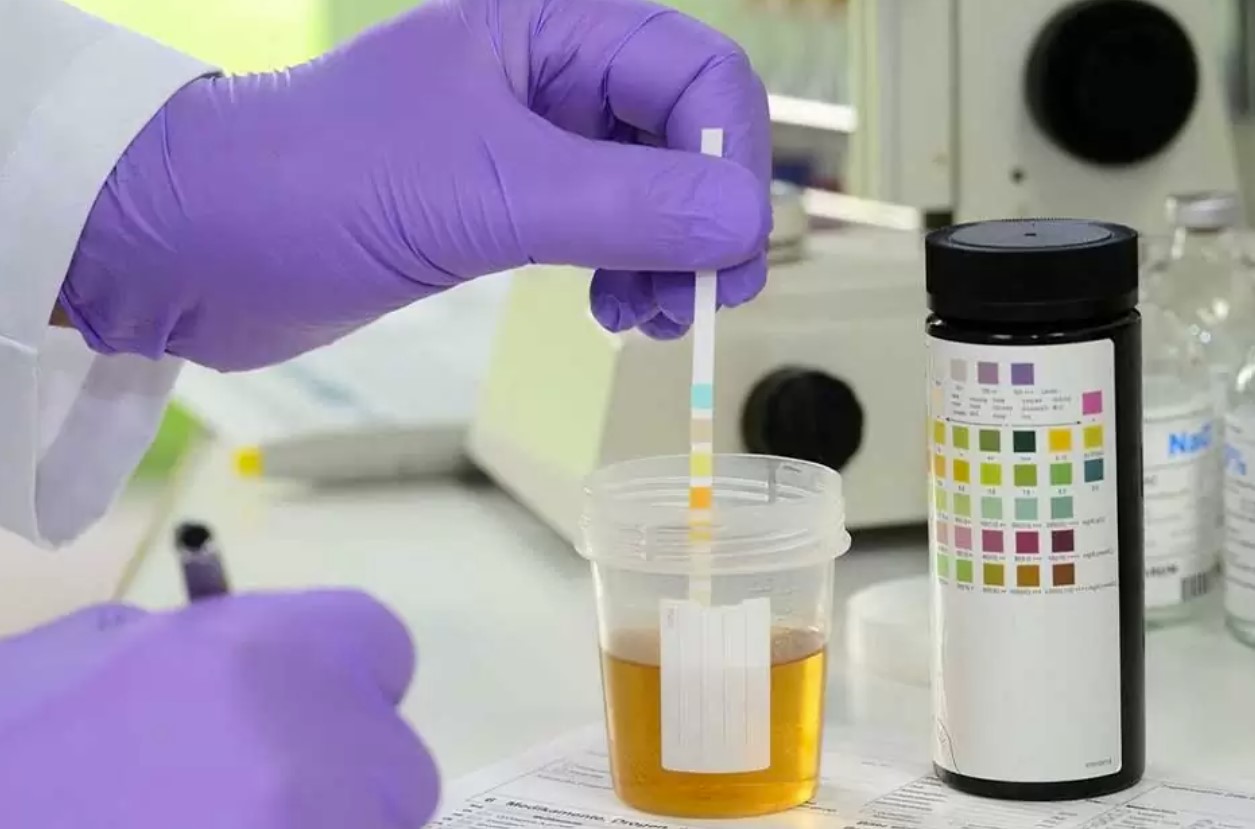 How Does a Urine Drug Test Work?

There are several ways to test for drug use – there’s the hair test, the mouth swab test, the blood test, and the urine test. The latter, however, is by far the most common type of test. This is because the urine drug test is relatively cheap, non-invasive, quick, and accurate too.

Most pre-employment requirements include the five-panel urine drug test, which looks for traces of five of the most commonly abused illegal drugs in the US – amphetamine, PCP, opioids, cocaine, and THC or marijuana. However, you can also be asked to take a six, seven, eight, nine, or even 10-panel drug test. These tests also look for traces of barbiturates, methadone, benzodiazepines, methaqualone (Quaaludes), and propoxyphene.

If you’ve never taken a urine test before, here’s how one usually goes:

How Far Back Does a Urine Drug Test Go?

If you’re a casual smoker – say, you only light up when you hang with your friends – you may be able to pass a urine drug test. However, if you smoke pot on a daily basis, you’re probably far better off keeping your own pee out of that collection cup.

Bottomline: Drugs, especially weed, can stay in your system for a pretty long time. We wouldn’t count on abstinence and detoxing with water to save you in cases like random testing!

So you’re a regular smoker who can’t buy time to purge the drugs from your system. You’re thinking, maybe I can sneak in a friend’s pee. But turns out, the only friend of yours that doesn’t smoke on the reg is someone of the opposite sex. Is the lab going to be able to tell?

To give a short answer, no, routine pre-employment drug tests do not usually test for gender. When you’re required to undergo drug testing for employment, you’re most likely going to take the cheapest, most basic type of test. Labs that do these kinds of tests don’t waste their time and money to check for gender, so theoretically, you should be in the clear.

So what are these subtle differences that we speak of? Here are four things that might ring alarm bells at the drug testing lab:

Out of Place Sex Hormones

Unlike male urine, female urine has the capability to contain the human chorionic gonadotropin hormone or hCG. This hormone isn’t always present in female urine though. It’s released into women’s blood and passed on into their urine when they’re pregnant, as the hCG hormone helps in the development of babies. The hCG hormone is what makes a urine pregnancy test possible.

If your male OR if you’re female and you’re NOT pregnant, you definitely do not want to be borrowing urine from a pregnant friend.

The Presence of Red Blood Cells

When women menstruate, their uterine lining sheds and they bleed through their vagina. Though the urethra and the vagina are two separate places, they’re close enough together that when menstruating women pee, traces of red blood cells (RBCs) can contaminate the urine. This is why women are advised not to take urine drug tests when they’re on their period.

Now, if you’re female and the drug testing lab find RBCs in your sample, you can easily tell them that your period unexpectedly came one or two days early. But if you’re male and the drug testing lab finds RBCs in your pee, this might raise suspicions or concern, especially since blood in urine is a symptom of UTI, kidney stones, and other similar illnesses.

Creatinine Levels that Are Off

Creatinine is what we call a “breakdown product” and is created when we use our muscles. This is significant because the higher your muscle mass, the more creatinine you have in your system, and generally speaking, men tend to have higher muscle mass than women.

So, if you’re female and you commission a burly, muscular man friend to lend you their urine samples, you might have drug testing technicians scratching their heads over why “your” creatinine levels are so high.

Sperm in the Pee

If women can avoid contaminating their urine samples with blood by collecting before or after their periods, the same can’t be said for men and their sperm.

See, in men, the urethra is the passage for both pee and sperm. Sometimes, sperm can be “washed out” during urination or, in some cases, can leak out after. While this is totally normal for men, women ought to be cautious about using their male friends’ urine sample for this reason. It’d be very strange for drug testing technicians to find sperm in a woman’s urine sample!

So How Can I Avoid Tripping Up Alarm Bells at My Drug Tests?

Using friends’ urine samples to pass a drug test may sound like a clever idea, but it isn’t 100 percent guaranteed to help you pass. There are, however, solutions online that are much safer. For example, there are some pretty great synthetic urine solutions that aren’t just designed to mimic real pee, but are also formulated to be unisex – so anyone can use them without worrying about those subtle differences ruining their drug tests.

There are tons of products out there, but not every one is super effective. I’m biased towards Clear Choice Sub Solution because it gets the formulation, color, specific gravity, and even temperature of real pee right. Unlike other brands that need to be heated up in a microwave or with bulky heating pads, Clear Choice comes with a patented heat activator powder that you just pour into the solution come testing time. It’s pretty neat!

If you’ll be taking a supervised test soon and you want to be sure you don’t get caught pouring your synthetic sample out of a bottle, you can also look for a urine delivery device. My favorite right now is Serious Monkey Bizzness’ Monkey Dong and Monkey Whizz. Monkey Dong is a great option for men, as it even comes with a believable prosthetic penis. You can use Clear Choice with these devices too.

To learn more about urine delivery devices for supervised tests, you can check out our buyer’s guide on how to pass a urine drug test.

While we wait for drugs like marijuana to become legalized across the board, we’ll have to accept that drug testing is just a part of our lives. And while it may be tempting to try and hack one of your tests with your friends’ pee, you ought to be extra careful about using samples from friends of the opposite sex. After all, you don’t want to find yourself explaining why you’re a 45-year-old pregnant man.