Now that we’ve all agreed on that, let’s get to the heart of the issue: how to avoid sucking at drug tests, especially urine-based ones. They’re one of the most common kinds of drug tests out there, and they can be scary good at picking up your harmless puff of weed last weekend.

And you know what comes next after that – a big inquiry at work, a police report, people judging you left and right… and if things get bad enough, you might smoke your next joint jobless. Everyone who smokes weed has been warned about this. But honestly, what’s the harm in a few puffs of THC after a long day at work? Do you really deserve to be screwed over just for that? We don’t think so.

That’s why we’re always on the lookout for new stuff to help hard-working smokers like you to puff-puff-pass your drug tests. Today, we’ll be looking at one of the more uncommon ways people have used to beat a drug test… by using Certo/Sure Jell fruit pectin.

What The Hell Is Pectin?

Pectin is a substance that’s found in stuff like sweet fruit. When you heat it together with sugar, it forms a jam-like substance that’s a lot like jelly. It’s a fiber, which means it’s good at getting your system flushed with toxins by pooping it out.

Now, Certo/Sure Jell is a brand of fruit pectin that’s been around for a long time – you might recognize it as a binder in your favorite slice of apple pie. But this sweet treat has also been the center of a detoxifying method that’s supposed to flush your system of toxins like the ones you find in weed. In theory, the ingredients in Certo will bind with the toxins in your bloodstream and convert them into fat for you to poop out.

This sounds a little bit unbelievable, but there is SOME science to back this shit up.

Certo/Sure Jell is high in carbohydrates and fiber, so it puts your body in a state where it’s forced to use the fat stores for energy since you’re not feeding it enough calories. When these fat-activated byproducts are released from your cells, they end up in your body’s fluids, which include your saliva, blood, and urine.

Now toxins like these normally leave your body via peeing, since they’re liquid. But what Certo/Sure Jell does is bind these toxins to the free-flowing fatty byproducts, which transforms them into a solid instead of a liquid. What Certo does is move the toxins that would be in your urine (because they’re in liquid form) to your intestines via fatty deposits (so you can poop them out).

Since Certo/Sure Jell already has a lot of fiber, your body should be able to gather most of the toxins in about a day or two, and you can poop it out without worry. 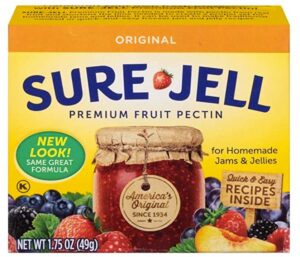 You see why this plan sounds good: you’re reporting in for a urine test, but all the toxins that can give you away are in your shit. Unless you’re being tested for your poop as well (which doesn’t happen unless it’s an annual health exam), you’ll come up clean in your urine test.

There are three reasons people have recommended Certo/Sure Jell to beat a urine test:

Since the process for binding toxins to your fat takes less than two days, it’s a way for you to prepare for an unexpected urinalysis. It draws metabolites (toxins like THC) in your bloodstream to your stomach and intestine instead of your kidneys, and with additional fiber and fluids you should be able to poop them out before your exam.

As far as detox products go, Certo/Sure Jell is one of the most available commercial products. Drop by the grocery after you get the notice for your upcoming drug test and buy yourself a pack. There’s a couple of other stuff that you will need (which we’ll talk about later) but as far as ingredients go, they’re an easy thing to get.

It’s not too complicated to use

Most people use Certo/Sure Jell with Gatorade (to replenish lost electrolytes) and multivitamins like B12 (to restore the lost nutrients in your urine) per serving. Aside from that, all you need is a lot of water and a few extra packs of Certo for this method to work.

So that sounds fine for Certo/Sure Jell pushes: the science sticks and it’s not too difficult to come across. How do you use it?

So you know how Certo/Sure Jell helps get rid of toxins in your body, but we’re talking a method here, not a product. What’s the other stuff that you need to do?

There’s two things that we mentioned earlier that work best with this method: Gatorade (or any sports drink) and multivitamins (especially B12). You need them because:

Sports drinks contain a lot of electrolytes, something that you lose when you pee or poop a lot. Given that Certo/Sure Jell will empty your bladder and your intestines, you’ll definitely need more of these to avoid getting dehydrated and actually being able to pee when testing day comes around.

Multivitamins don’t just help your body cope with the flushing process, but they also reintroduce a lot of key ingredients that are found in normal urine. If you skip taking them with your Certo/Sure Jell, your urine can come out diluted during testing, which can set off alarms about your sample. Multivitamins in higher doses can help make up for the missing ingredients in your urine.

Ideally, you should be taking a mixture of Certo/Sure Jell with the sports drink the night/s leading up to the drug test, with an additional mixture of two hours before the test. Take multivitamins with your last dose so your urine doesn’t set off any alarms.

Not very complicated, but that’s one of the strong points of this method. But does it work?

In a nutshell: maybe. There’s evidence that it works for some people, but the lack of a consistent standard on how to use Certo/Sure Jell effectively as a detox product and the different profiles of users make it a difficult thing for us to recommend. There are also these issues to consider:

It’s unreliable after a day

Unless you keep drinking your Certo/Sure Jell mixture, your body will start showing signs of drugs. This wouldn’t be a problem if they can’t suddenly change testing times – and would you want something with a limited window of effectiveness to work for you?

There’s no guarantee it can catch all the toxins

While binding toxins to fatty deposits can work, remember that your entire body contains traces of drugs after use. It’s a good way to get about 80% of the toxins in your body to pass as poop, but there’s always the danger that it can’t catch them all.

If you’re asking “so why was this product ever marketed as a detox?” the answer is because it COULD’VE worked before, when urine testing didn’t have access to better equipment that can break down your urine by the millimeter. As a folk cure, it’ll pass under casual scrutiny: but for high-tech laboratory equipment, not so much.

However, this doesn’t mean that it’s WORTHLESS as a detoxifier – again, if you’re a very occasional user, this is a good complement to stronger detox products out there. Even if you don’t take the fat-binding feature of the product into account, it’s still a good source of fiber which can help lessen the overall amount of toxins that can they can detect in your body.

So What If I Want To Be Absolutely Sure I’ll Pass?

We’d personally recommend that you only use the Certo/Sure Jell method with another detox product, like Toxin Rid. It’s too weak of a formula on its own to be used to GUARANTEE a passing piss test, but combined with stronger detox products, your chances of passing are a lot higher.

Alternatively, you can skip this step all together and just buy yourself a synthetic urine kit such as Quick Fix to put into the bottle during testing. You don’t have to do any long-term detoxing methods before taking your test, and it’s a product that mimics real urine closely enough to pass a laboratory test. It’s a faster and more convenient solution than detoxing, and can work for anyone.

Is the Certo/Sure Jell method legit? Maybe. But is it a way that would guarantee that you’d pass your urine test? Hell no. If you’re looking for a sure way to pass urine tests 100% of the time, we’d recommend that you look for other solutions aside from this.

It might sound like a tasty idea, but this is one solution that we think should stay in pies instead of pee.